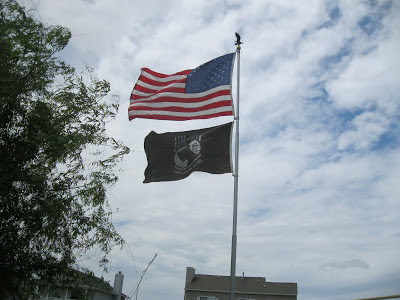 This was one of the most amazing mission trips I've been on. I think the seven people I went with would also agree with this. The family we helped was somewhat leery of having help - this is a "pull 'em up by the bootstraps" kind of guy. And here comes eight WASPs to his home in New Jersey - he doesn't know us, he doesn't know our skill set and it's a bit overwhelming. Who can blame him?

But somehow we clicked -- after that first day, he knew we meant business and we had done this before.At the end of the week, he flew his flags for the first time since the hurricane.

This has been one of the best experiences I've had in a long time and I'd do it again in a minute.
Posted by Anne McIlree Noble at 8:57 PM