This ought to be interesting...

Posted by Anne McIlree Noble at 4:35 PM No comments: 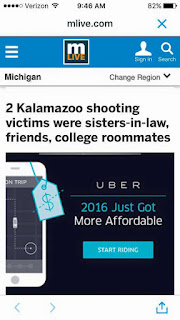 The shootings in Kalamazoo, Michigan hit home for me -- Kalamazoo is the home of my alma mater and former employer -- Kalamazoo College. One of the surviving victims is an employee of the college.

What has hit home is the fact though this horrible tragedy has received worldwide news coverage -- as it should -- the local news media is dropping the ball. One would think that they have an edge over the national and yes, international media covering the story. It's their territory and they know the people and the sources.

I have been going to the local media sources for news -- and, in my opinion, not getting a whole lot. In the meantime, national and international media outlets have been spot on in their coverage -- digging down and getting the behind the scenes stories people want to read -- an example is the woman who managed to save her children and several neighborhood children by blocking the shooter with her own body.

She's fighting for her life in a local hospital, but her heroic story was first told in a British newspaper, I believe. Certainly wasn't the Kalamazoo paper.

But hey -- the Kalamazoo paper -- part of mlive.com -- posted the story above -- along with an ad for Uber. Guess what -- the shooter was an Uber driver! But of course you know that. Apparently mlive did not.

Yeah, right. I know there's no such thing as a copy editor or layout editor anymore -- it's pretty obvious.


Posted by Anne McIlree Noble at 5:26 PM No comments: